Space weather on Earth is mainly controlled by the strong magnetic storms and particle storms which are caused by the enhanced fluxes of protons and ions. These accelerated plasmas are known as solar energetic particles (SEPs). The generation of SEP is mainly due to two phenomenon, impulsive SEP events caused by magnetic reconnection manifested as solar flares, and gradual SEP events accelerated by strong shocks associated with coronal mass ejections (CMEs).

The study of both of these phenomena is very important in terms of how space weather affects life on Earth. The large, gradual, and long-lived SEP events are of particular interest as the arrival of the associated interplanetary CME and shock and the enhanced SEP fluxes can cause severe damages to satellites in space and technology on the ground. They are known to produce beautiful auroras, as well as cause major power disruptions (Carrington event, 1859) during extremely intense geomagnetic storm.

The scientific literature provides several results of good correlation studies between CME speed and the peak flux of the associated SEPs. However, JU astronomers shown that their innovative method based on the use of so-called instantaneous speed of SEP particles allows to obtain much more precise physical parameters of their emission.

The simple conclusion of the paper is that if only the maximum speed and the CME speed and Mach number at SEP peak flux are well-determined (which occurs within 10 solar radius), the maximum flux of the associated SEP event can be easily determined using the author’s empirical model. The solar disk and west solar limb events can produce the most powerful SEP events as they are magnetically well connected to the Earth due to the rotation of the Sun.

The good correlation obtained for fluxes of protons in the > 10 MeV energy channel support the hypothesis that the protons are predominantly accelerated by shock waves generated by fast CMEs propagating in the interplanetary space. The > 50 and > 100 MeV energetic particles are also mostly accelerated by the same shock waves but a partial contribution by the associated flares can be also involved in their acceleration. Solar flares and SEPs show poor correlation, further supporting the hypothesis of choosing the CME-driven shock as a better indicator of SEP acceleration.

3 January 2012 event of a Coronal Mass Ejection and the associated Solar Energetic Particles seen by Large Angle and Spectrometric Coronagraphs (LASCO) on board SOlar and Heliospheric Observatory (SOHO). The particles, seen as white grains in the field of view, onset approximately 4 hours after the CME eruption. Credit: SOHO Observatory. 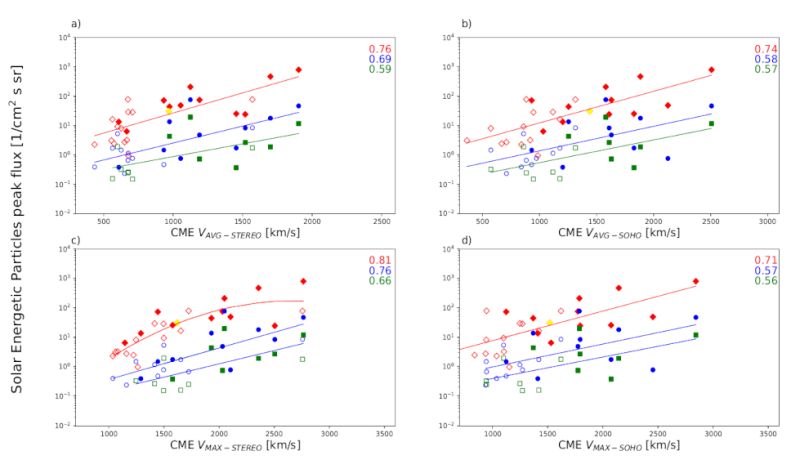 Scatter plots of maximum of SEP flux at three energy bands (>10 MeV (red), >50 MeV (blue), and >100 MeV (green)) vs. the respective speed of CMEs (average speed-STEREO (panel a), maximum speed-STEREO (panel b), average speed-SOHO (panel c), maximum speed-SOHO (panel d)). The open symbols represent disk events (longitude -20 < L < 45) and filled symbols represent west events (Longitude > 45). There is one east event, on 31 August 2012 (longitude < -20; in yellow). This is the only event in our sample analyzed by STEREO-B as it exhibited good quality. The solid curves are linear fits to the data points. Credit: The Authors. 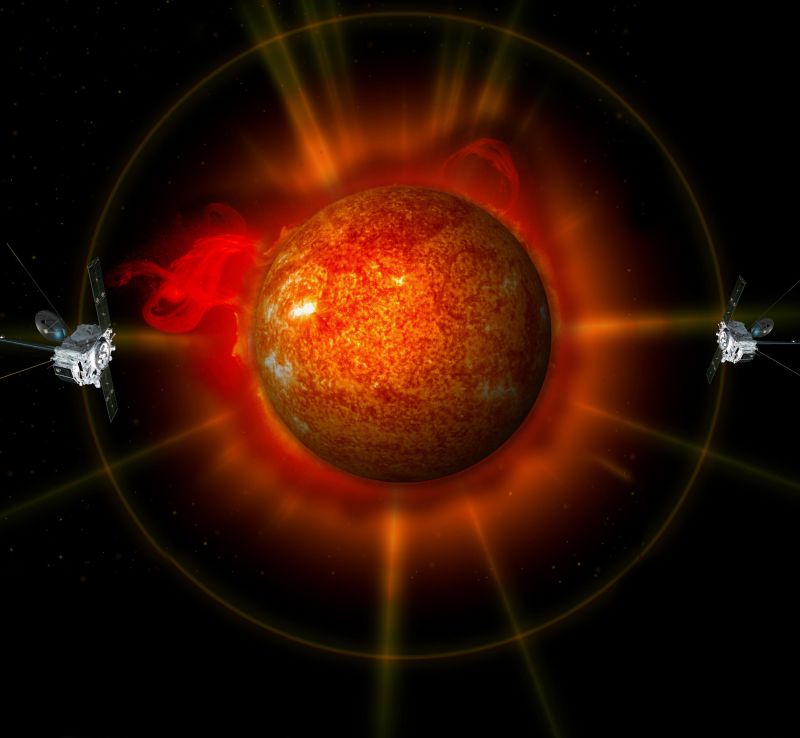 STEREO A and B twin spacecrafts placed at distant and opposite points of the active Sun's orbit. Credit: NASA.