On June 17, journal Nature published the paper of researchers from the international H.E.S.S. Observatory, presenting the discovery of high-energy gamma emission from the relativistic beam, or "jet", of the nearby active galaxy Centaurus A (Cen A). This important astronomical discovery was made with participation of Polish scientists, including the team from the Astronomical Observatory of the Jagiellonian University. With a total of 202 hours of observation (this corresponds to about 1/6 of the entire observation time per year!), it was found that the previously known emission of high-energy gamma radiation from this object comes not only from the area located around its central supermassive black hole, but also extends along the jet, thousands of light years deep into the examined galaxy. 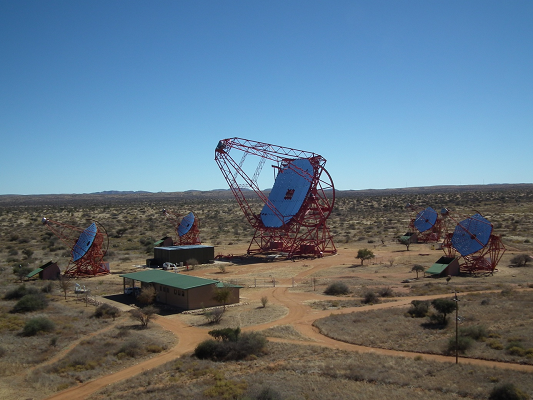 Gamma radiation, powerful electromagnetic emission produced in space, arises mainly from the interaction of accelerated and electrically charged particles with the surrounding gas or radiation field. So, in the jet of Cen A, far away from the center of the parent galaxy responsible for its formation and propagation, some high-energy particle acceleration processes must occur to speed the particles up to energies higher than those of protons accelerated by physicists in the most powerful terrestial accelerators.

Jets, fired at nearly speed of light from the vicinity of supermassive black holes residing in active galactic nuclei, are powerful radiation emitters throughout the entire electromagnetic spectrum, from radio waves to the gamma range. However, while radio, optical or X-ray observations allow us to study the structure of the jet due to the high sensitivity and resolution of the current measurements, only unseparated emission that could entirely come from the active center of the galaxy has been observed so far on gamma waves.

Scientific breakthrough presented in the article was possible due to the application of the measuring technique using optical "Cherenkov telescopes" from the H.E.S.S. observatory. High-energy gamma rays from space are recorded in this observatory through the cascades of secondary particles produced in the upper atmosphere – huge particle showers of electrons and positrons (anti-electrons) moving at nearly speed of light. Gamma radiation is directly invisible to us on the Earth's surface. However, due to the fact that the particle of the cascaed are flying through the air faster than the speed of light in the atmosphere (!), they generate so-called "Cherenkov radiation", i.e. weak light visible in the optical range, and thus can be observed. What is even more, the energy and direction of the initial gamma waves can be determined. H.E.S.S. telescopes, allowing for high precision measurements of these optical afterglows, can therefore study also the gamma radiation responsible for their origin and arriving from cosmic sources – with resolutions far exceeding the capabilities of satellite observatories that study cosmic gamma radiation from above the atmosphere, such as Fermi Gamma-ray Space Telescope. This made possible to present the discussed discovery, wherein Cen A galaxy still required extremely long observation of its low gamma emission, as well as very precise and difficult analysis of the observational data.

International H.E.S.S. (High Energy Stereoscopic System) observatory conducts observations in southern Africa, in Namibia. Astronomical Observatory of the Jagiellonian University has been involved in the exciting research work of this project for over a dozen years, with the financial support in the form of grants from the National Science Center and the Ministry of Science and Higher Education. In 2017, discussion of our research was presented in a lecture at the Institute of Physics of the Jagiellonian University, now available on YouTube.

The project is part of research conducted at the Department of High Energy Astrophysics and Department of Stellar and Extragalactic Astronomy of the Jagiellonian University’s Astronomical Observatory. The work was supported by the Polish National Science Centre through the grant NCN 2016/22/M/ST9/00382. The research team from OAUJ included: Michał Ostrowski, Marek Jamrozy, Łukasz Stawarz and Angel Priyama Noel.

Illustration 2. Cen A galaxy in X-ray from the Chandra satellite. One can see a strong emission from the vicinity of the central black hole and the X-ray jet directed up to the left. Źródło: Chandra.harvard.edu.
Illustration 3. Cen A galaxy seen in the optical range. Gamma emission observed by H.E.S.S. comes from the central area of this galaxy, where the jet (here invisible) extends from the black hole lying directly in this center. Credit: APOD.
Photogallery 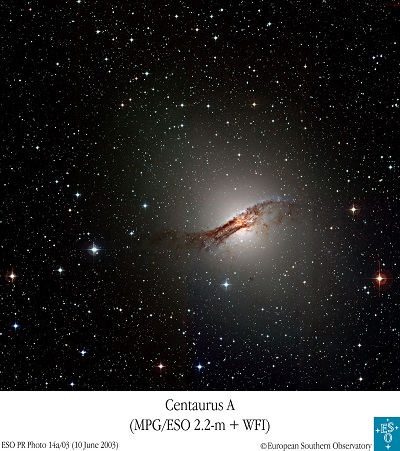 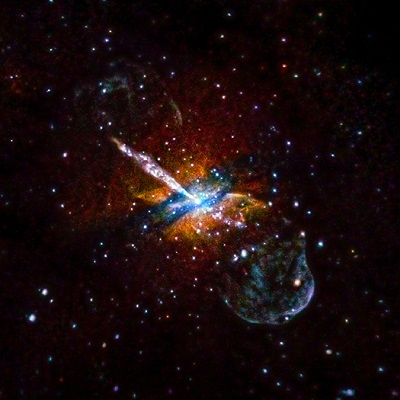 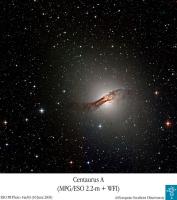 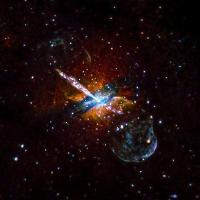