Interstellar Comet with a Familiar Look

A new comet discovered by amateur astronomer Gennady Borisov is an outcast from another star system, yet its properties determined so far are surprisingly familiar – a new study led by JU researchers shows. The team’s findings are being published in Nature Astronomy on 14 October 2019.

For decades, astronomers have speculated that the space between stars may be populated by exosolar minor bodies – comets and asteroids – ejected from their home planetary systems. Studies have also suggested that these bodies may occasionally pass through the Solar System and be identified thanks to their strongly open orbits. The discovery of ‘Oumuamua two years ago brought the long-awaited confirmation, sparking hopes for subsequent detections.

A team of scientists led by astronomers from the Jagiellonian University in Krakow, Poland had done their homework well ahead of time. Prompted by the earlier visit of ‘Oumuamua, they created a computer program nicknamed “Interstellar Crusher” that scanned tirelessly through online data of newly-found comets and asteroids in search of guests from far away. On 8 September 2019 at 04:15 universal time, the program issued a red alert and notified the team of a possible new hyperbolic object arriving from interstellar space. “This code was written specifically for this purpose, and we really hoped to receive this message one day. We only didn’t know when,” said Piotr Guzik of the Jagiellonian University, who led the study. The body had been first spotted by Gennady Borisov a week earlier, although its identity had been unknown at that time.  A closer investigation into the object’s orbit confirmed its exosolar origin, making it the second-known interstellar interloper.

Two days after receiving the alert, the team was already scrutinizing their first images of the object obtained at the William Herschel Telescope on La Palma, Spain, and getting ready to receive more data from the larger Gemini North Telescope on Maunakea, Hawaii. The photographs were obtained in two color bands and provided the first astrophysically significant glimpse of the body. “We immediately noticed the familiar coma and tail that were not seen around ‘Oumuamua,” said Michal Drahus of the Jagiellonian University, who co-led the study with Guzik. “This is really cool because it means that our new visitor is one of these mythical and never-before-seen ‘real’ interstellar comets,” Drahus said. It took proper measurements before the team could determine the comet’s color and estimate its other properties. They have found that comet Borisov has a dust-dominated morphology, a reddish hue, and that its solid nucleus is about 1 km in radius. “Make of this what you will, but based on these initial characteristics, this object appears indistinguishable from the native Solar System comets,” said Guzik.

The team’s research is only a prologue to a more thorough investigation. “The comet is still emerging from the Sun’s morning glare and growing in brightness. It will be observable for several months, which makes us believe that the best is yet to come,” said Waclaw Waniak of the Jagiellonian University, co-author of the study. The team still has a considerable amount of observing time reserved on the Gemini North Telescope, and they had booked a large slot on the European Southern Observatory’s Very Large Telescope well ahead of Borisov’s discovery. “We can safely say that research on this body will be transformative for planetary astronomy and a milestone for astronomy in general,” Guzik said.

The study was conducted with significant financial support from the Polish National Science Centre as part of the SONATA BIS program (grant no. 2016/22/E/ST9/00109). The project is part of research conducted at the Department of Stellar and Extragalactic Astronomy of the Jagiellonian University’s Astronomical Observatory. 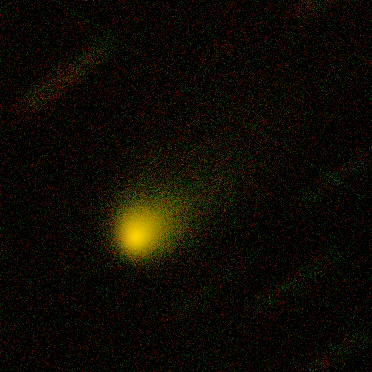 Credit: Gemini Observatory/NSF/AURA
Two-color composite image of comet 2I/Borisov captured by the Gemini North telescope on 10 September 2019. The image was obtained with eight 60-second exposures, four in green and four in red bands.