HADES experiment (www-hades.gsi.de) has published in Nature Physics (DOI: 10.1038/s41567-019-0583-8) intriguing results of the research on exotic nuclear matter produced in collisions between gold ions, accelerated to almost 89% of speed of light in GSI/FAIR in Darmstadt (near Frankfurt at the Main). The experiment has been performed by almost 150 researchers, including scientists of the Department of Hadron Physics of Jagiellonian University. Between 2003-2014 the head of the group was prof. Piotr Salabura. Currently this function is performed by prof. Joachim Stroth from the University of Frankfurt.

During the heavy-ion collisions dense and hot nuclear matter is produced, for a very short time of order 10-22 s, of size similar to atomic nucleus but with properties reminiscent of matter produced during the collision of neutron stars.

In the measurements carried out by the HADES detector it was possible to measure the decay of virtual photons whose spectrum allows, same way as the spectrum of solar radiation, to estimate the temperature of interior of such compressed nuclear matter at about 70 MeV, which translates to about 1012 K!

Virtual photons during such collision are emitted very rarely (about 10-5 per collision) and unlike real photons they have a mass. It is possible in a very short time due to Heisenberg’s uncertainty principle. Virtual photons convert into long-lived positron-electron pairs that are measured in the detector and allow to measure their mass.

The decay of photons produced in annihilation of positron-electron pairs was measured and compared with the theoretical decay calculated on the assumption of thermalized source consisting mainly of concentrated nucleons (nearly 3-4 times compared to the atomic nucleus) at this average temperature.

It occurs that the radiation is emitted through the decay of short-lived particle (time of about 10-23 s) called rho meson which is the intermediate state between photon and hot nuclear matter. It allowed to measure the mass degeneracy of this meson and state that it is significantly different than the vacuum degeneracy known by physicists!

To explain it in easier way, the mass decay of meson rho undergoes a significant broadening in hot and dense matter and partial dissociation. It confirms the observations carried out in experiments of probing such radiation at much higher energies in CERN and RHIS (USA).

The fact is interpreted according to the hypothesis saying that light quark masses constituting nucleons and mesons (rho) have a mass generated in strong interactions, in particular interactions between gluons i.e. bosons mediating in the interaction.

According to this interpretation the mass depends on the environment, in particular temperature and density of nuclear matter – which is confirmed by theoretical calculations. 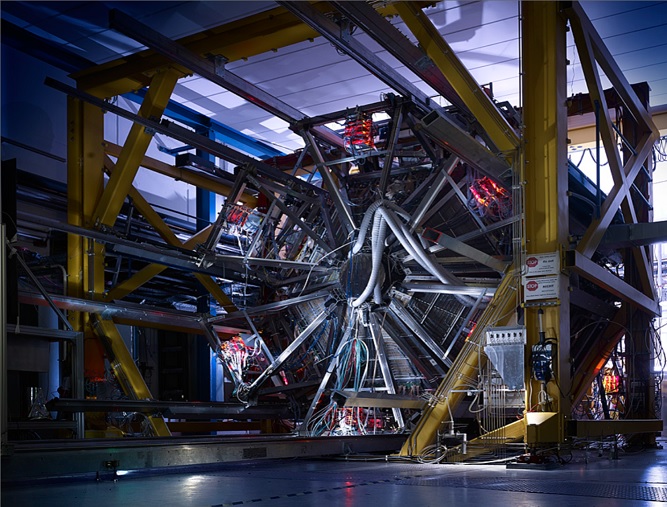