At the end of October 2018, an interesting set of publications, by a team of Hungarian scientists, were published in the Monthly Notices of the Royal Astronomical Society. Judith Sliz-Balogh, Andras Bart and Gabor Horvath reported their observations of the Earth’s dust moon. The initiator of the search for these dusty moons of Earth was doc. Kazimierz Kordylewski from the Astronomical Observatory of the Jagiellonian University.

Special location(s) in a system of two bodies

In a system of two orbiting bodies, there are five special locations*. These places are named in honor of their discoverer, Lagrange, and so labeled Lagrange points; two of them, L4 and L5, are so-called stable Lagrange points.

If a low mass object is placed at one of these stable points, it maintains a fixed position relative to the two more massive bodies. Astronomers have found a large number of small celestial bodies located around points L4 and L5 in such massive systems as: the Sun - Jupiter, Sun - Earth and Sun – Mars systems. This class of objects also includes, for example, asteroids from the Trojan group.

How many satellites of Earth are there?

Cracow astronomer doc. Kazimierz Kordylewski (1903-1981) proposed the following question: can interplanetary compaction of matter be detected at the Lagrange points located in our immediate surroundings (in the Earth - Moon system)? In the spring of 1961, K. Kordylewski observed and photographed a local brightening of the sky background, derived from sunlight scattered on a dust concentration present there – located in a position corresponding to the Lagrange point, L5 in the Earth - Moon system [1]. This took place at the meteorological observatory on Kasprowy Wierch, chosen by the astronomer purposely to minimize the artificial illumination of the sky.

This way, doc. Kordylewski crowned, with success, his many years of searching for dusty satellites of Earth; which were named, after many years, the dusty Kordylewski clouds in his honor. For the entirety of his academic career, this Polish astronomer was honored with many decorations, including the Bronze Medal of NASA (1972).

There were many attempts to confirm the existence of these dust moons, however, Kordylewski clouds are difficult to observe due to their very low brightness. In 1961, in Rockport, Massachusetts (USA) Richards G. Hodgson also tried to spot them. His efforts, however, did not give a positive result. In subsequent years, several astronomers questioned the discovery of Kordylewski. Their arguments were as follows: hypothetical dust moons cannot exist, because the gravitational influences of the Sun, other planets and the phenomenon of solar wind do not allow the stable presence of dust at the Lagrange points. However, Kordylewski's discovery was in turn confirmed, in 1964, by the amateur astronomer, American J. W. Simpson, and later by many other professional astronomers. One of them was J. R. Roach, who announced, in 1975, the discovery of dust clouds from data collected by the Orbital Solar Observatory OSO-6.

The history of discovering Kordylewski moons has one more interesting aspect related to the Jagiellonian University, and in particular to the research conducted by dr. Maciej Winiarski in the OA UJ station in Roztoky Górne. In the eighties of the last century, M. Winiarski confirmed the existence of Kordylewski clouds by measuring the weakening of light from distant stars passing these clouds.

Recently, a team of Hungarian scientists found new evidence of the existence of these dusty satellites of Earth. They used the polarization of electromagnetic waves in their observations. Light coming directly from the Sun is polarized; the scattering of the Sun’s light on dust particles causes this polarization. Kordylewski's moons can therefore be detected by observing polarized light scattered by the dust forming them. After very complicated observations, Hungarian astronomers detected weak polarized light around the Lagrange point, L5, of the Earth-Moon system [2]. In addition, their computer simulations have shown that particles ranging in size from a micrometer to the size of an average stone, can remain at the Lagrange points for a long time, and the dust cloud formed from them has an ever-changing shape - in particular, it can pulsate and spin [3]. 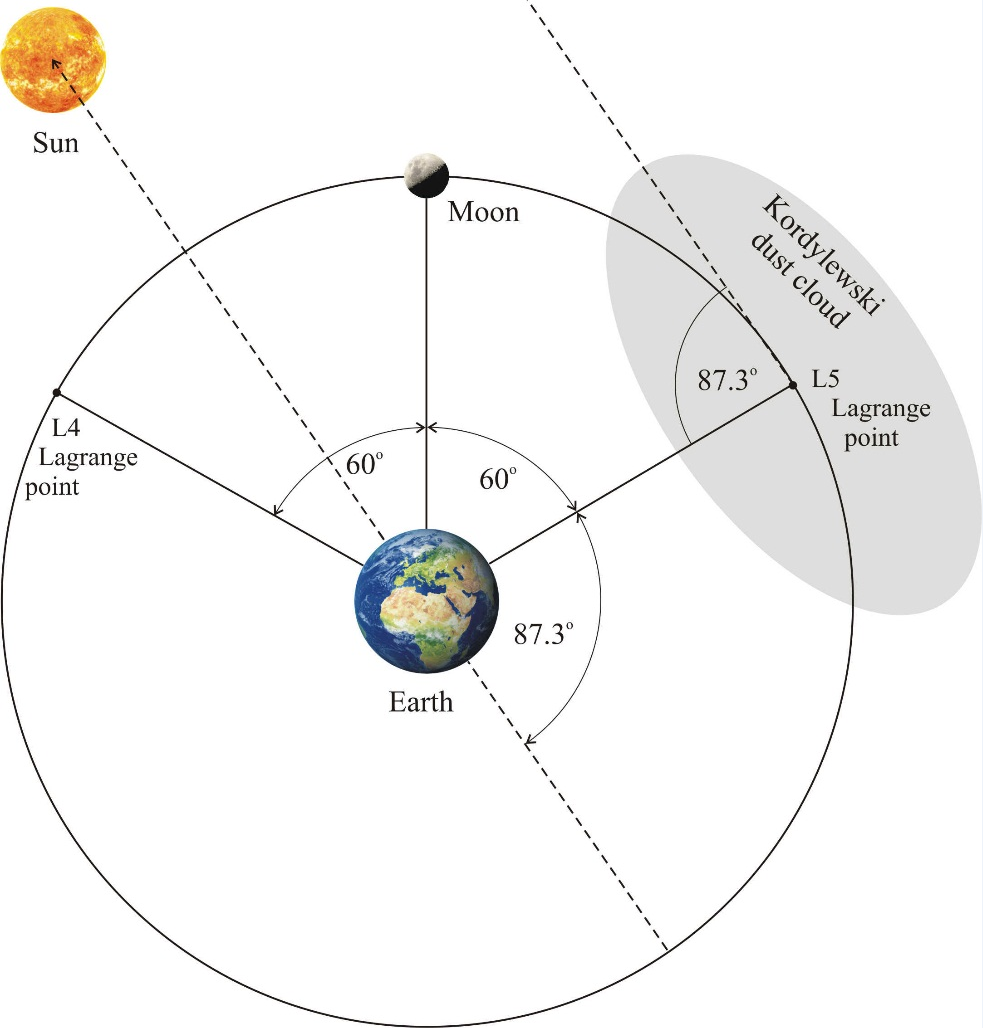 Figure 1:  Positions of the Moon and the L5 Lagrange point of the Earth-Moon system in the plane of the Moon’s orbit on 19 August 2017 at 01:14:15 UT with 87.3o phase angle. The scale of linear dimensions of the presented objects (including the dust cloud) are not preserved. Source: J. Slíz-Balogh, A. Bart, G. Horváth (2018).

In celestial mechanics, Lagrangian points are position of equilibrium in the equations of motion for restricted circular three-body problem